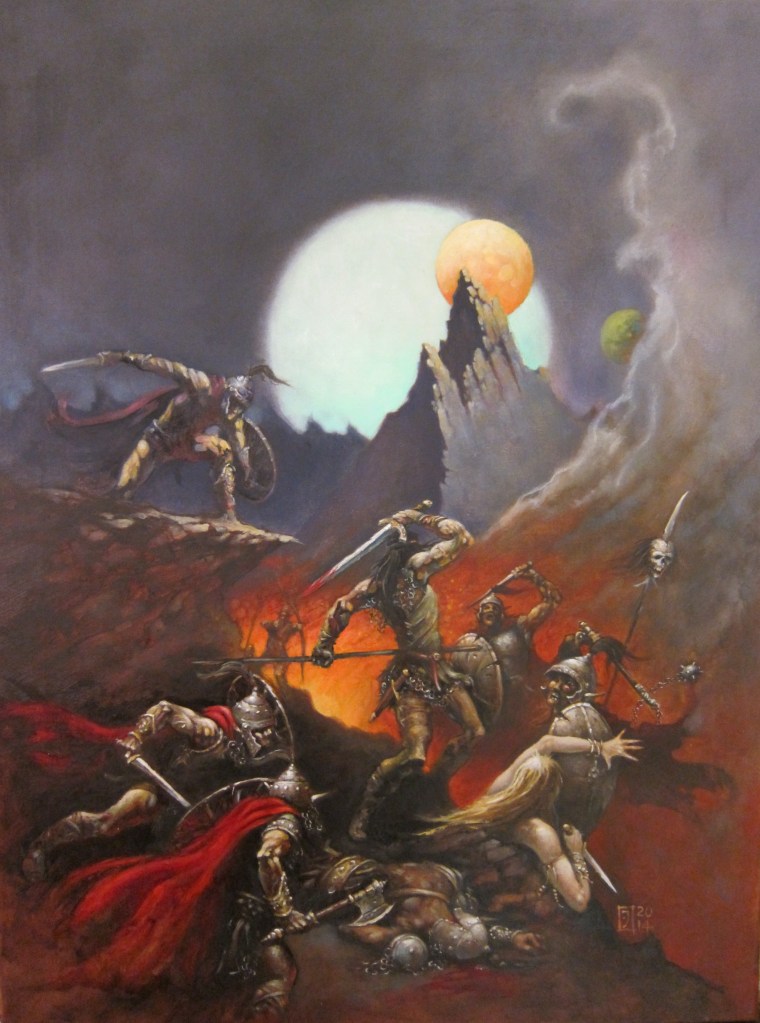 This the print ready version of the cover illo for M B Mooney’s Blades of War. It’s 24″x 30″ oil on canvas. 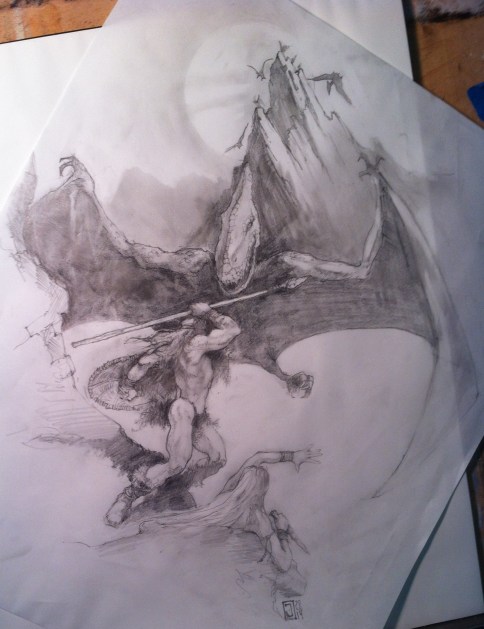 Here’s a quick sketch that I did the other day. Since I haven’t posted anything for a while I figured I would put this up. Maybe one day it will make it onto a canvas. 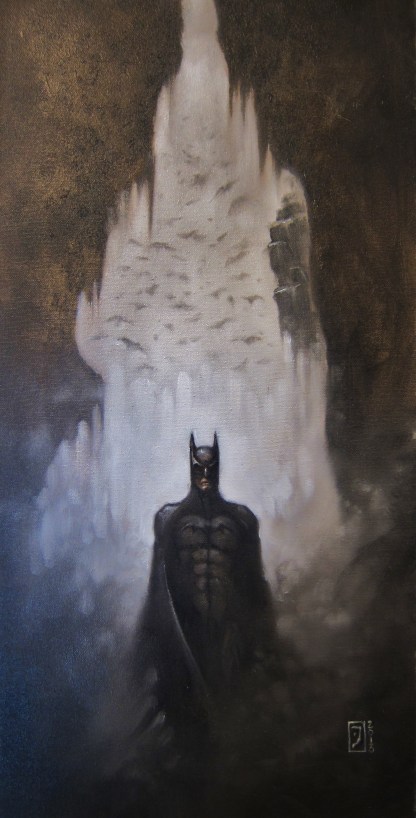 I’ve always wanted to do a Super Hero illustration. So this morning I started this one of Batman. I feel that it came together rather quickly, which was rather surprising. Normally I over work everything in an effort to squeeze every ounce of detail possible out of each piece. I wanted to try to maintain an ethereal feeling with the composition so there is not much detail to try to render. 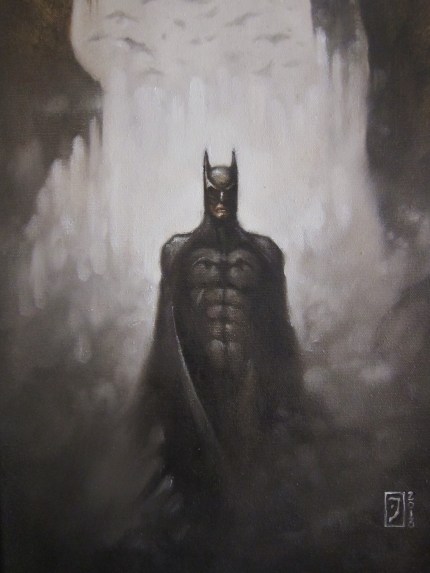 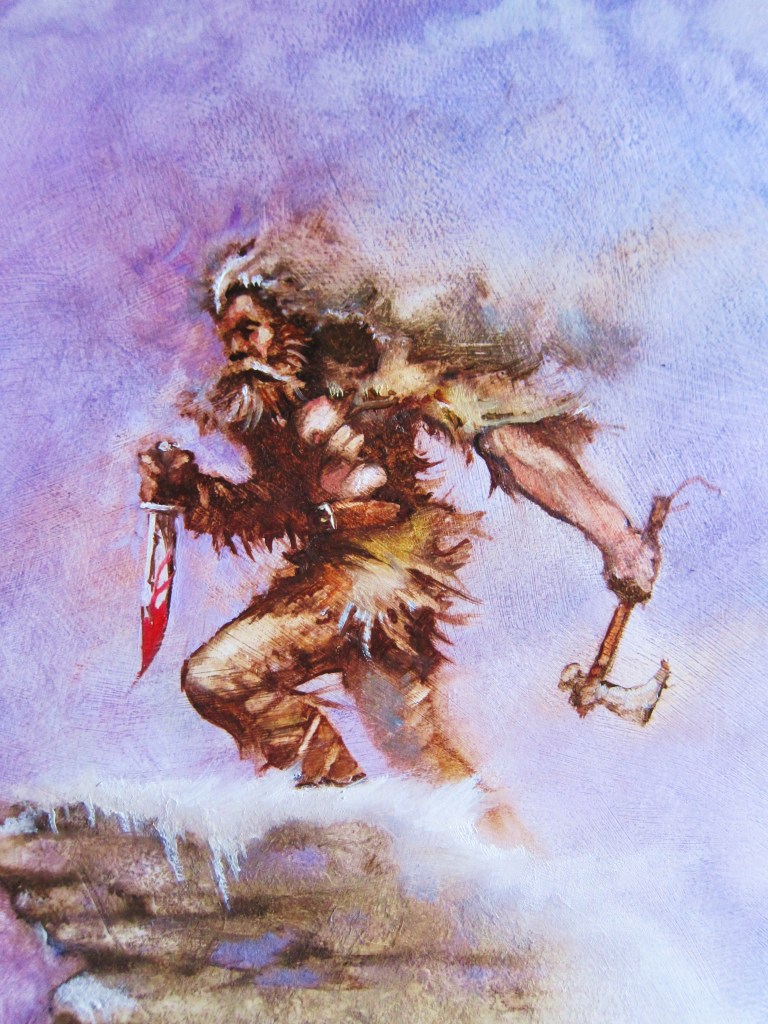 This my second attempt at a more spontaneous painting style. This is also on a drum head. Actually it’s painted over The Seal Hunter illustration that was about 12 years old. So the fur and feathers are already on the drum. This crusty old dude will be fighting a wolf pack when I’m done with everything. 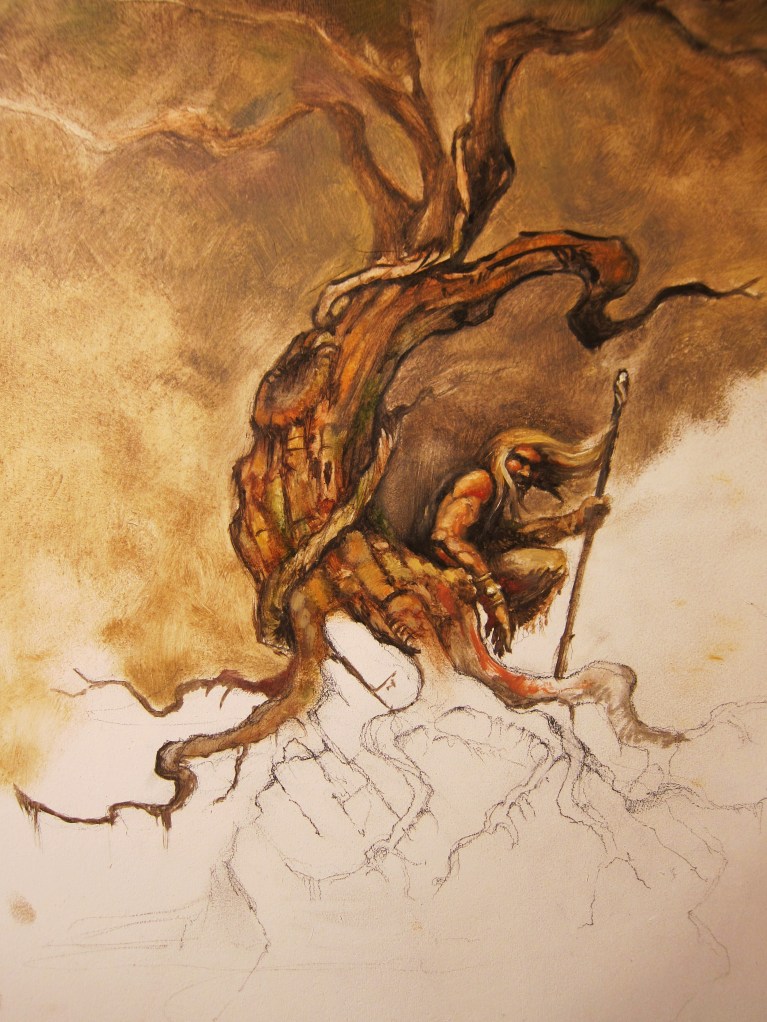 What you are looking at here is a color sketch for M. B. Mooney”s book The Living Stone. This is just a concept sketch and doesn’t necessarily represent the final piece with any great deal of accuracy. Though this helps me get a feel for what the author and publisher are looking for. When I was at The St. Louis Museum of Art a couple of weeks ago I couldn’t help but notice the vast number of drawing’s that one particular artist rendered just produce one finished work of art. All too often in our modern age we skip some steps in an effort to get to final piece. A fellow artist asked me how looking at all those preliminary drawings made me feel. I said, “Lazy.” 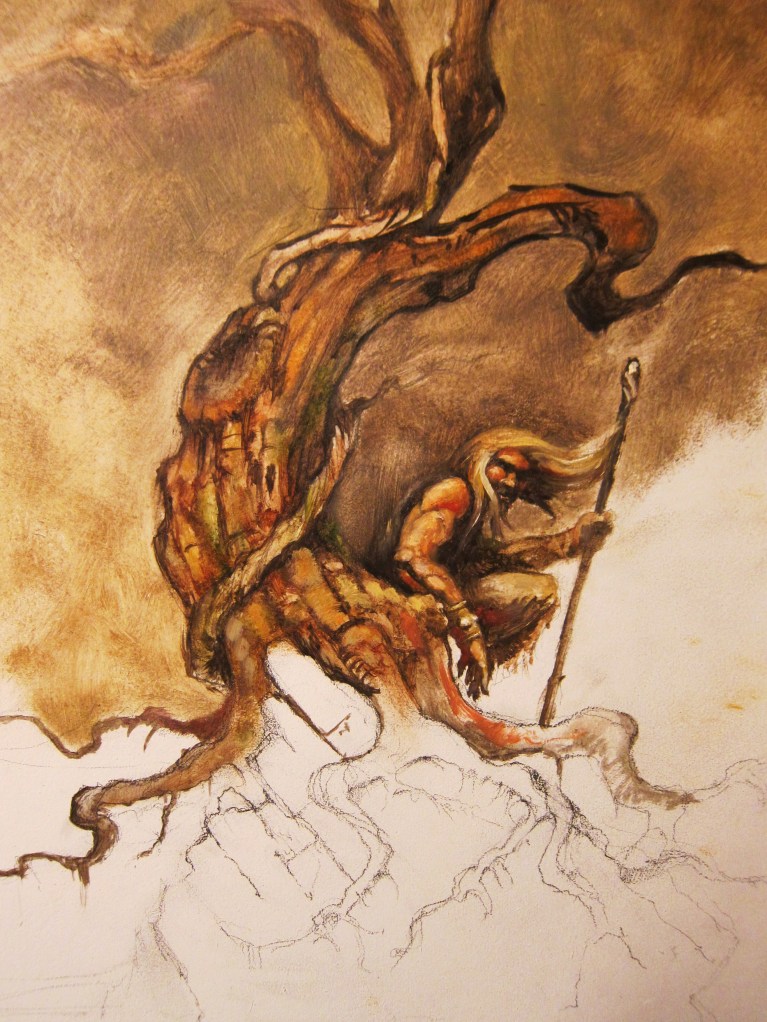 Detail of the color sketch, this gonna be a cool book cover if I do say so myself! 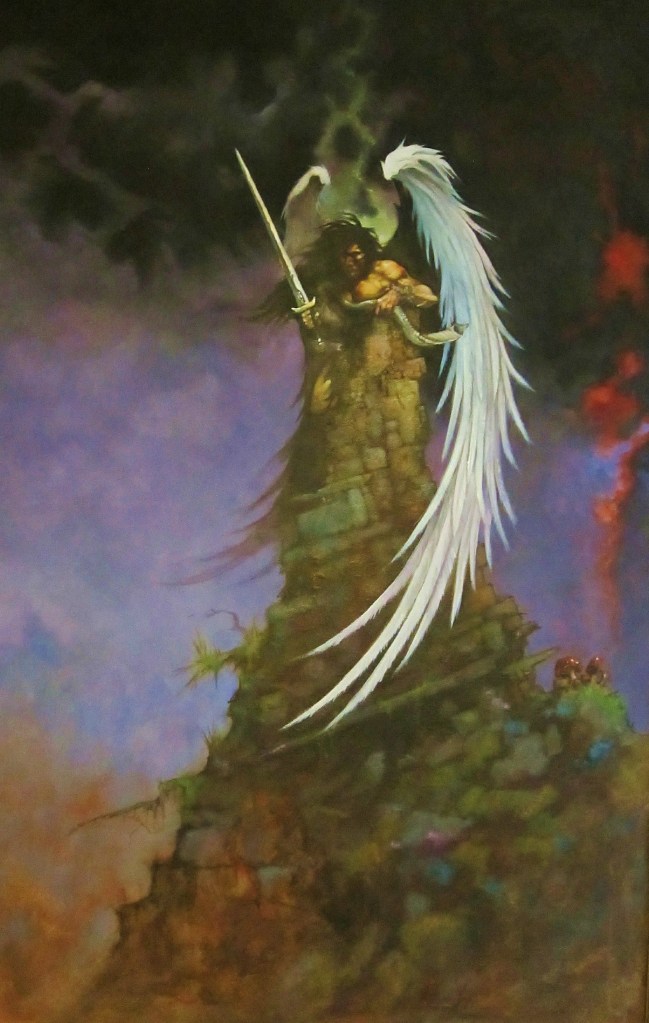 It’s been a long time since I have completed a painting of this size and dramatic impact. This was one of those images that just sort of popped into my head one day. I had been thinking about how most of the angels I’ve painted in the past have no wings though the book of Revelation does mention an angel “flying in mid-heaven” (wherever that is) so I figured some of them must have wings. However they they may not be anthropomorphic in appearance. The ones in Isaiah certainly sound more like dragons than men. Seraphim can be best described as a firey flying serpent.

I painted over the Land of the Giants because it didn’t seem to give me look I was going for. However I will paint that particular subject, just not in that format. I really felt t lacked the visual tension that I wanted for a battle of that nature. I guess you could say that I’m finicky about what projects I’ll complete and which ones get scraped. I won’t insult your intelligence by explaining why I named this the Watcher. The shofar in his hand is the ancient horn of renown that was used in the Old Testament to do everything from summoning the armies of God to bringing down the walls of Jericho. The priests used it to summon the children of Israel to the tent of meeting and it was also synonomous with the voice of the Most High God. Click on the image to get a close up and then use the magnification tool to get up close and personal with the Watcher….

Oh yeah, and in case you are wondering I added the mushrooms in the lower right hand corner for mood contrast. A very whimsical move on my part. Just for fun. 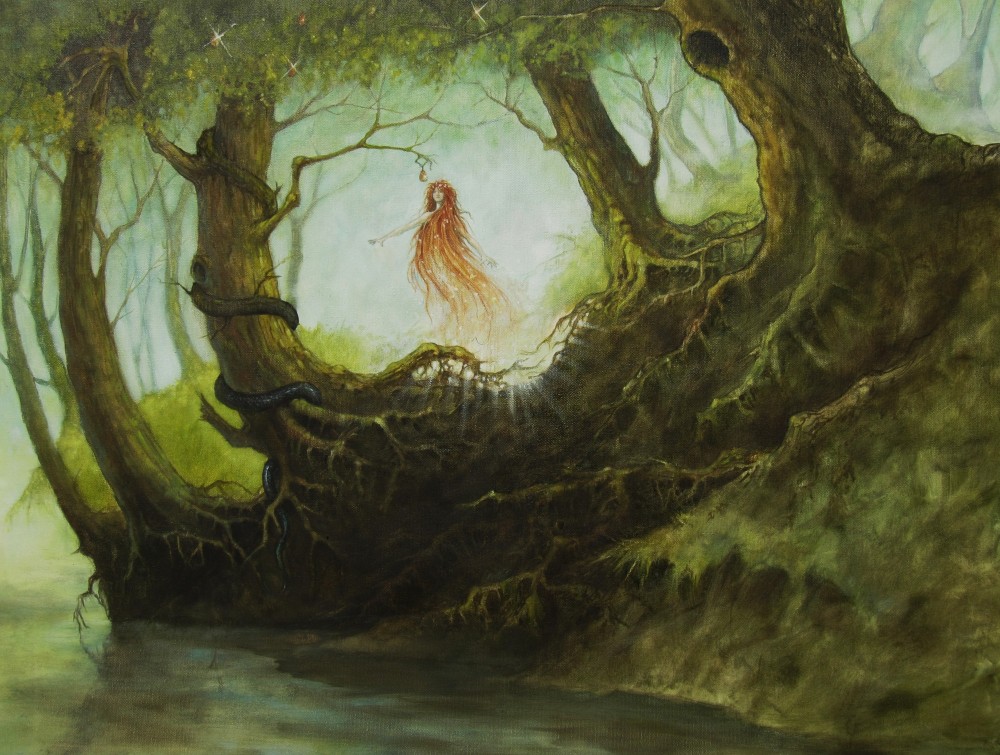 I posted this for a Canadian model builder who has don a model of the spaceship fromOut of the Silent Planet. He’s very good at what he does and you should check out his blog. www.thegreatcanadianmodelbuilderswebpage.blogspot.com